A day in the life of a: Construction Manager working on a multi-million pound project. 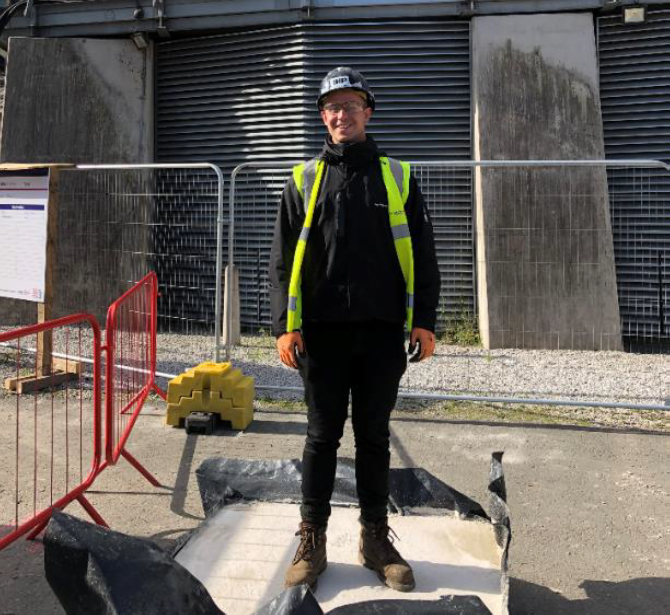 It started at 16. Part time summer jobs working on construction sites, followed by a failed attempt at A Levels, to dropping them to pursue a BTEC, “I can’t even remember what it really was, something to do with construction”, to then finally completing a degree in Construction Project Management at Salford University and landing a job at his local firm.

Theo Coleman is now one of a number of VINCI Construction Managers currently working on some of the new build-to-rent high rise buildings in Manchester city centre.

The structures are part of the “New Victoria” scheme: a £180m development set to provide 520 new homes over two, 20 and 25-storey buildings, including 178 one-bed, 286 two-bed and 56 three-bed apartments. “This is probably the most prestigious job I’ve worked on. In terms of where it is and the constraints that we’ve had to work around. I suppose I’ve been quite lucky” Theo tells me.

At only 32 year’s old, the young Construction Manager from Burnley is thriving in his career, having already spent 2 years in his current position. Traditionally, Construction Managers oversee programmes but do not have much input on them. Although on paper it’s Theo’s official job title, he explains that he has taken on a lot of senior responsibilities throughout this complex project.

A day in the life of a Construction Manager is diverse, dynamic, and lengthy, with lots of responsibilities ranging from human relations, to managing deliveries, to supervising health and safety. On Theo’s current development, a briefing usually takes place at around 8am with all the ‘black hats’: a term used to help identify the managers working on site.

“You’d probably just be straightaway looking at any issues that people have raised at the 8am, you know, there’s always a problem. Nothing ever goes smoothly.”

Some of the most expensive setbacks come from the ground and can cost thousands of pounds, a lot of which are unearthed on the spot and must be dealt with immediately. Complications include piling problems, muck shifting concerns, and contamination issues (some of which are more severe than others).

The young manager continues, “then for the next two to three hours, you’re walking around from floor to floor, building to building. You might do that on your own, or you might end up walking around with the black-hat from the subcontractor that you’re working with”.

Theo then puts it quite simply, “I’m either in meetings, or I’m out, sorting problems out”.

One of the major differences from having previously worked as an Assistant Construction Manager is the heavy admin load. Beforehand, Theo had been spending 80%, if not 100% of his time getting his hands dirty on site. Nonetheless, the work has not simmered down, “I think sometimes I probably wish there was an extra two days in the week, just so you could get your work done”.

It is not uncommon for a Construction Manager to be deployed to another site before a project is finished, with working environments varying greatly. Management staff might be brought in for specific duties and could later be relocated to another site where they’re needed more urgently. “I just prefer the stuff in the ground really, all the messy stuff” Theo says.

As well as this city centre based project, Theo has worked on other developments such as a greenfield site –a development site that has not previously been developed for urban residential or industrial use – but first and foremost: building, and refurbishing hospitals. The young manager tells me, “about 60% of the turnover in the North West at the minute is through hospital work. In lockdown, I think we did 2,500 bed spaces, you know, for the Covid-19 wards”.

Hospital projects tend to be more time consuming, not due to their difficulty, but as a result of having to relocate patients as the works go on. “If patients are just in day wards, or they’re fairly able bodied, it’s obviously a lot easier to decant them than people who are on life support machines and stuff like that, it takes a lot longer.”

Theo has had to deal with his fair share of unique hurdles during the course of this project, with the current site based just next a live railway, alongside an old Victorian culvert of historical value that runs through the middle of the job. Subsequently, multiple partners are involved in the works, such as Network Rail.

“They have to be so strict [Network Rail], because if you think about how much building goes on, up and down the country, if developers and builders were just throwing their weight around and getting away with it, I mean before long, they would just be putting buildings up on the railway lines, and there’d be nothing left to run them on [trains].”

As a young person coming in

Construction Management positions are becoming very appealing to young people in the UK as the industry continues to boom, and there are numerous qualifications and degrees which could land you a management position. But the responsibility at such a young age comes with its fair share of implications.

“A lot of the people you’re dealing with have been doing their job longer than you’ve been alive. I always used to make a joke about that when I was in my 20s.”

“You’re going there and you’re asking them to do stuff, maybe a bit differently, because they’re not doing it as safe as what they should be, and they’ve got away with doing it that way, and then you come along, and you start telling them to do it differently because that’s the proper way and the safe way to do it.”

“You’re just the new kid on the block who’s telling them how to do stuff, and they don’t like it, so they’ll test you. They’ll push you and I would say that is that is one of the hardest things getting into it.”

The young manager’s passion for construction has persevered over the years; still brimming with optimism, his future looks sharp as he hopes to find himself in a more senior position soon. In 10 years’ time, “I don’t know if I would want to be a Project Manager on a massive job, or whether I’d want to go do a bit of just contracting for myself”.

So, what does it take to be the best?

“You’ve got to be very confident in your abilities because you’ve got to be able to make snap decisions when problems arise. You know, holding off on a decision could cost you tens of thousands of pounds, really. If you want to go work in a decent place, you’ve got to be sure that you can do a bit of everything.”

Theo continues, “you’ve got to be very patient, and very good at listening. I would say gone are the days of, you know, that sort of old manager style where you’re yelling at people. It’s getting a lot more professional, and people want to be spoken to properly.”

“It’s all down to respect. If you want to run a good team, everyone needs to respect each other.”